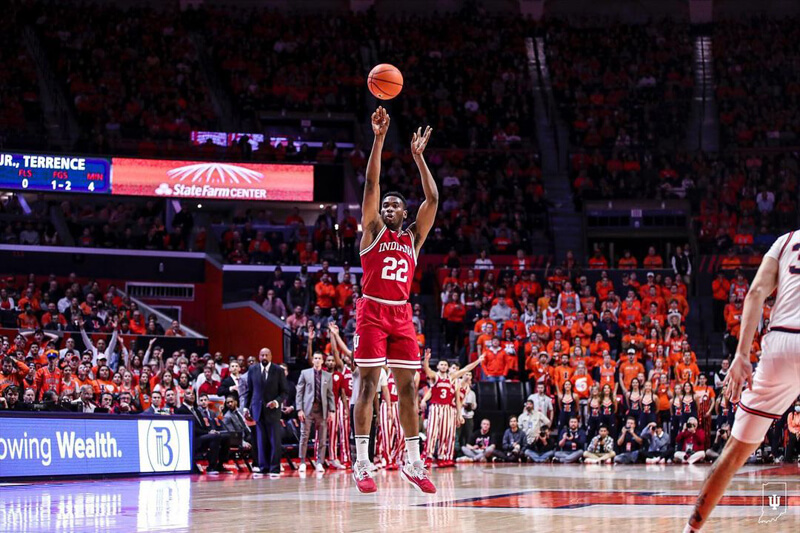 Indiana fell behind 4-0 early, prompting Mike Woodson to call for an early timeout. The Hoosiers responded by scoring the next 12 points to grab an eight-point lead at the 14:38 mark. The lead hit double figures for the first time at 18-7 on a Jordan Geronimo layup and was stretched to 14 at 26-12 on a Jalen Hood-Schifino by the 8:15 mark. The Hoosiers would go on to build a 19-point lead in the first 20 minutes, but Illinois cut the cushion to 10 by halftime. Still, it was an impressive 20 minutes for the Hoosiers as Trayce Jackson-Davis and Geronimo both scored 13 points and Hood-Schifino had 10 in 20 first-half minutes.

By the 14:51 mark of the second half, Indiana pushed the lead back to 18 on a bucket from Jackson-Davis. The Hoosiers stretched the lead to 21 on a Miller Kopp 3-pointer with 12:19 to play, but Coleman Hawkins answered just 11 seconds later with a 3-pointer of his own to make it 62-44 at the under 12 media timeout. Indiana’s lead was back at 21 after a Jackson-Davis bucket made it 66-45 with 10:12 to play. Indiana turned it over three times in less than two minutes and the Illini got within 15 at 66-51 with 8:27 to play. Terrence Shannon’s 3-pointer with 7:48 to play made it 66-54 Indiana. The Hoosiers stopped the 9-0 Illini spurt with a bucket by Trey Galloway with 7:17 remaining. After a missed Shannon jump shot, Galloway scored on a breakaway on the next possession to push the IU lead to 16 with 6:36 to play. Indiana was never seriously challenged the rest of the way. The win, Indiana’s second on the road this season, improved the Hoosiers to 12-6 overall and 3-4 in Big Ten play.

Jackson-Davis was dominant, finishing with 35 points on 15-for-19 shooting. The All-American forward added nine rebounds, five assists and three blocked shots in 35 minutes.

Statistics that stand out

It wasn’t as strong of an effort as the Wisconsin game, but Indiana was stout defensively in Thursday’s win. The Hoosiers held the Illini to just .95 points per possession and only 38.7 percent shooting from the field. 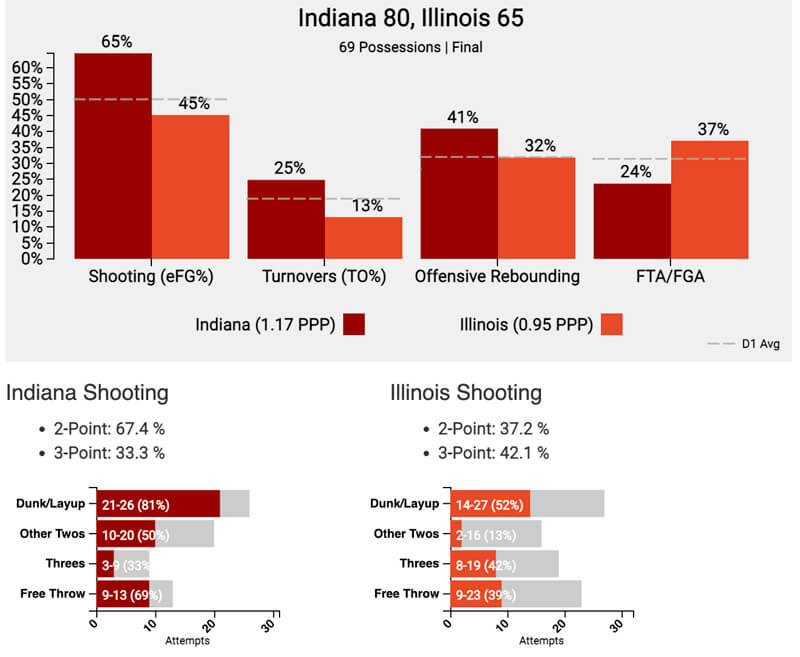