Two things can be simultaneously true: Brock Purdy is obliterating expectations for a seventh-round draft rookie, and this version of the 49ers is one of the most quarterback-proof teams in recent memory.

The combined result: In six of the seven games Purdy has played, the 49ers have scored more than 30 points. In the one game that they failed to do so, Purdy was too hurt to even throw in practices leading up to the game.

Kyle Shanahan is doing some of the best work in his career as a play designer and play caller, getting receivers wide open. Against the Seahawks in the wild-card round, Purdy’s completion percentage over expected (CPOE) was -0.5 — meaning though he threw for three touchdowns and ran for another, he wasn’t necessarily outperforming his circumstances. When Purdy gets the ball to his playmakers, the 49ers have the best collection of yards-after-catch (YAC) specialists in the league. And to go along with this QB-friendly offense, the 49ers have the NFL’s best defense.

Historically, teams with elite defenses have just needed game managers, like the 2000 Ravens with Trent Dilfer or the 2002 Buccaneers with Brad Johnson. But being a true shutdown defense in this era of passing and the increasing list of defensive penalties is difficult. Against the Seahawks on Saturday, the 49ers’ defense and Purdy were both off for much of the game — and San Francisco still dominated.

Even with the Seahawks focused on stopping the run, the 49ers rushed for 110 yards in the first half. To stop the run, the Seahawks used more base personnel (three defensive linemen, four linebackers, four defensive backs) and got another defender in the box by playing two-deep coverage less frequently than normal. Seattle instead played more traditional spot drop coverages, which Shanahan exploited with play action.

The 49ers spammed this route combination featuring a deep corner and dig route throughout the game. According to TruMedia, Purdy was 3-of-4 for 99 yards when targeting the dig route, but he also checked the ball down once when the dig was wide open. 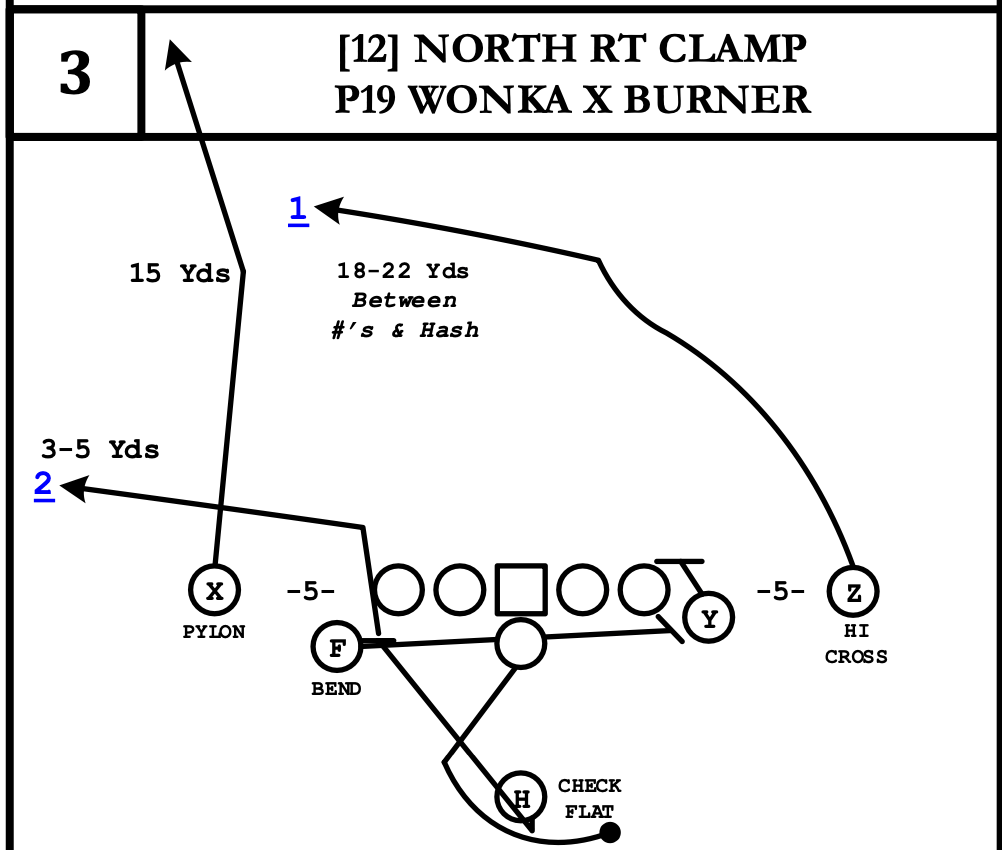 Usually, the 49ers would run this combination with a high crosser, but in this game, they had the backside receiver run a dig instead. 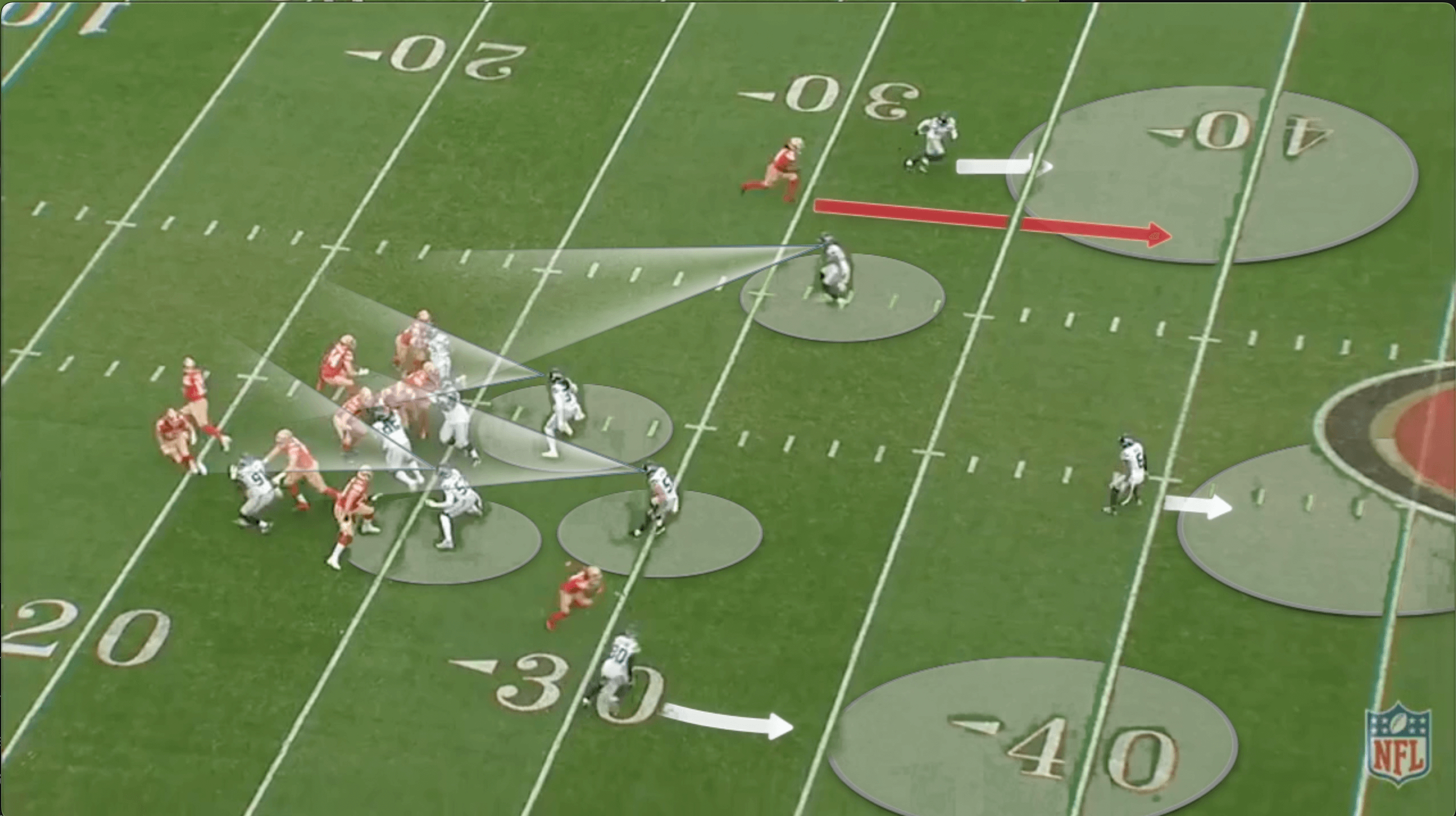 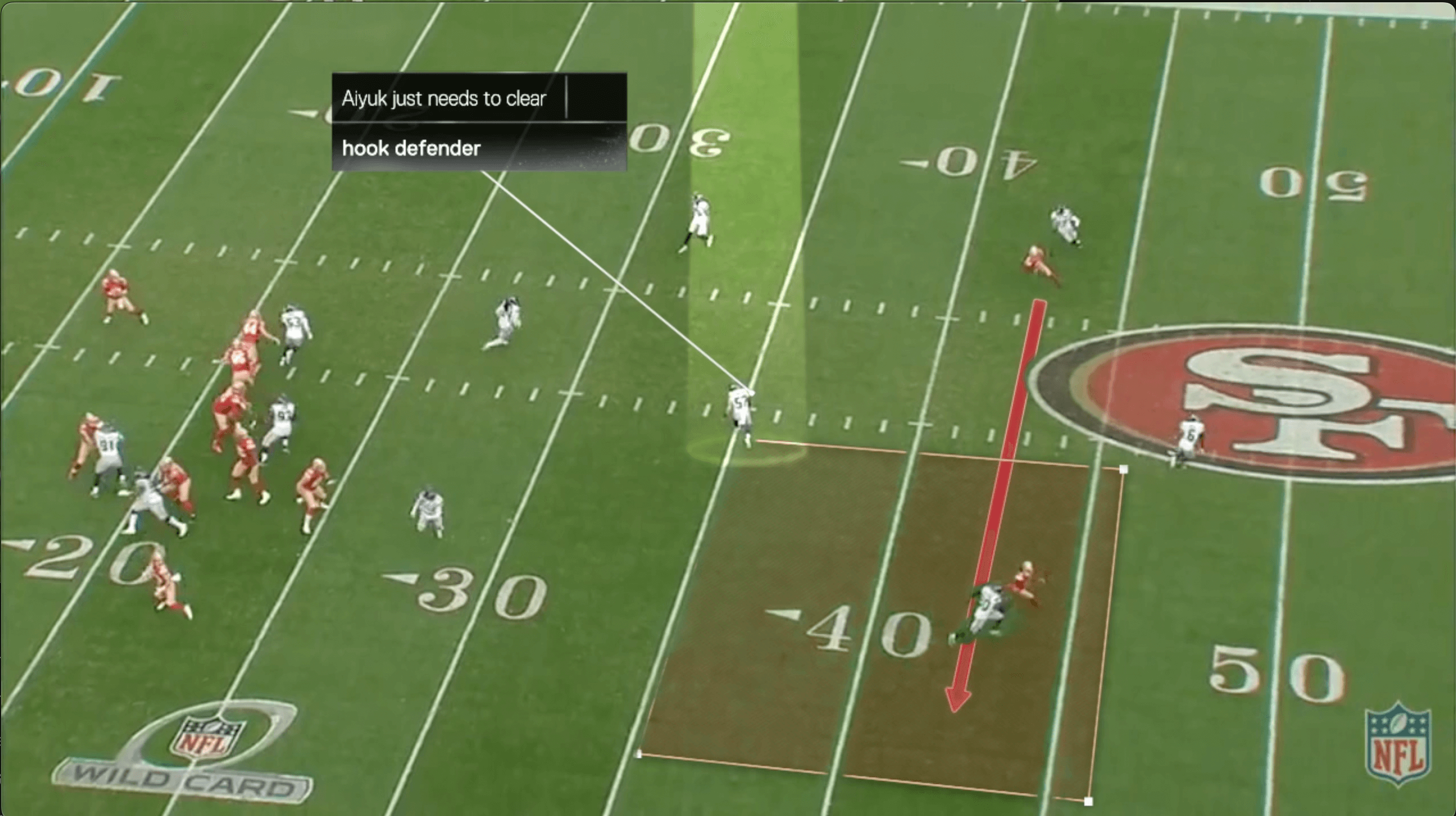 The Seahawks’ underneath defenders with their eyes on the quarterback had no idea where Aiyuk was because Aiyuk got so much depth. As soon as Aiyuk crossed the spotlighted underneath defender, he had a huge void in the coverage to run into. All Purdy had to do was anticipate that window opening up and deliver the ball. 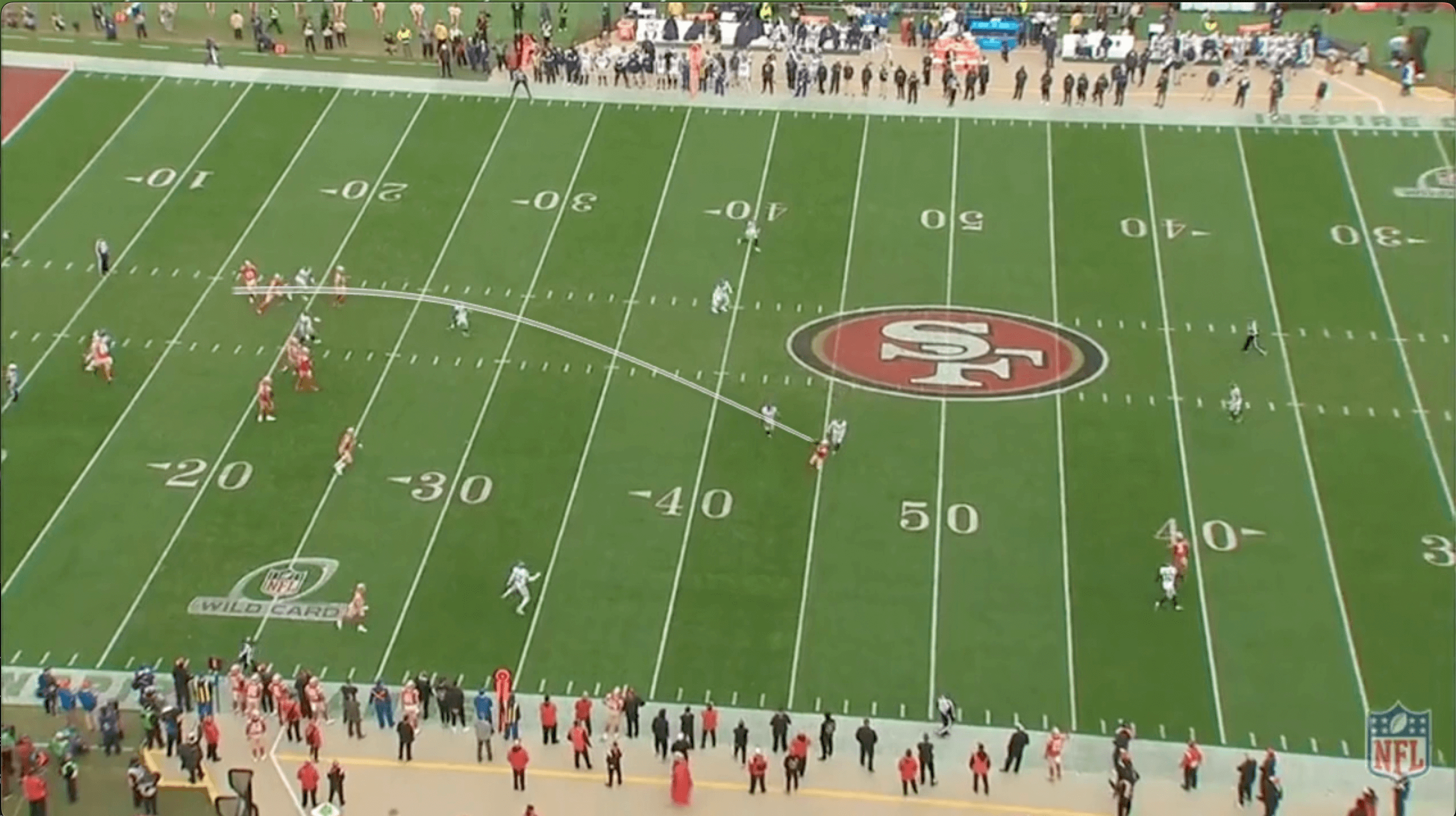 Purdy threw the ball before Aiyuk cleared the hook defender and hit him in stride.

The fear of the run caused the Seahawks to play this style of defense, and they didn’t adjust fast enough. This concept worked so well that the 49ers used it in the two-minute drill without play action and still hit Aiyuk for a 31-yard gain.

With Christian McCaffrey, Deebo Samuel and George Kittle, a short check down can turn into an explosive play. Since Shanahan was hired as the 49ers’ head coach, the 49ers lead the league in YAC per reception. They purposely scout and look for players who can create after the catch, and Shanahan is adept at creating space underneath for his YAC monsters to work. According to TruMedia, Purdy ranks eighth among 39 qualified QBs in the share of his passing yards that come after the catch (51.4 percent), and Jimmy Garoppolo ranks first (59.4 percent). 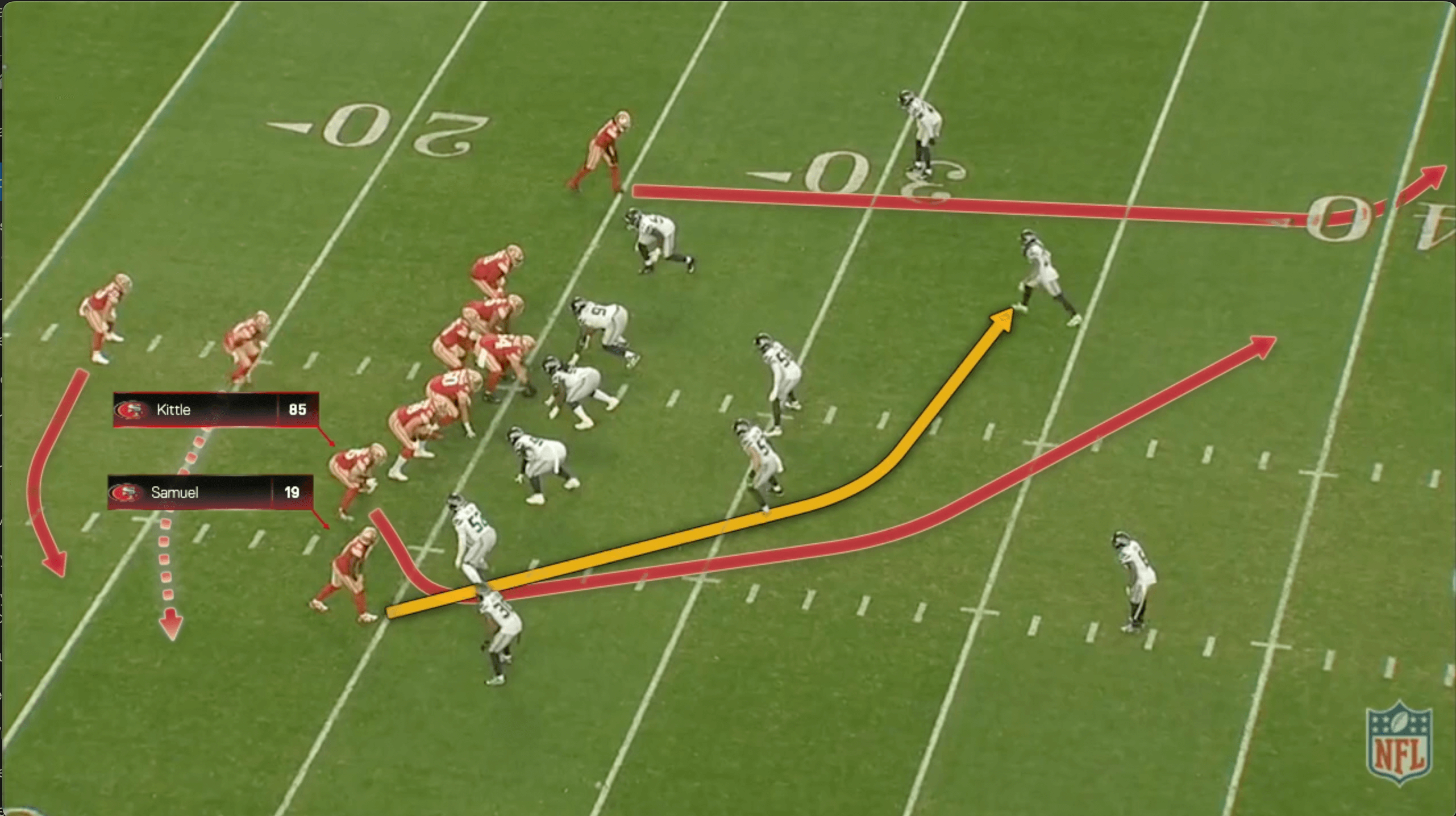 On this play-action concept, the Seahawks were once again in their base 3-4 with a safety rotating into the box. Instead of a dig, the 49ers had Samuel run a low crosser and Kittle run a high crosser behind him. This concept was designed to high/low the weak side of the coverage and get the ball to Samuel underneath with space. 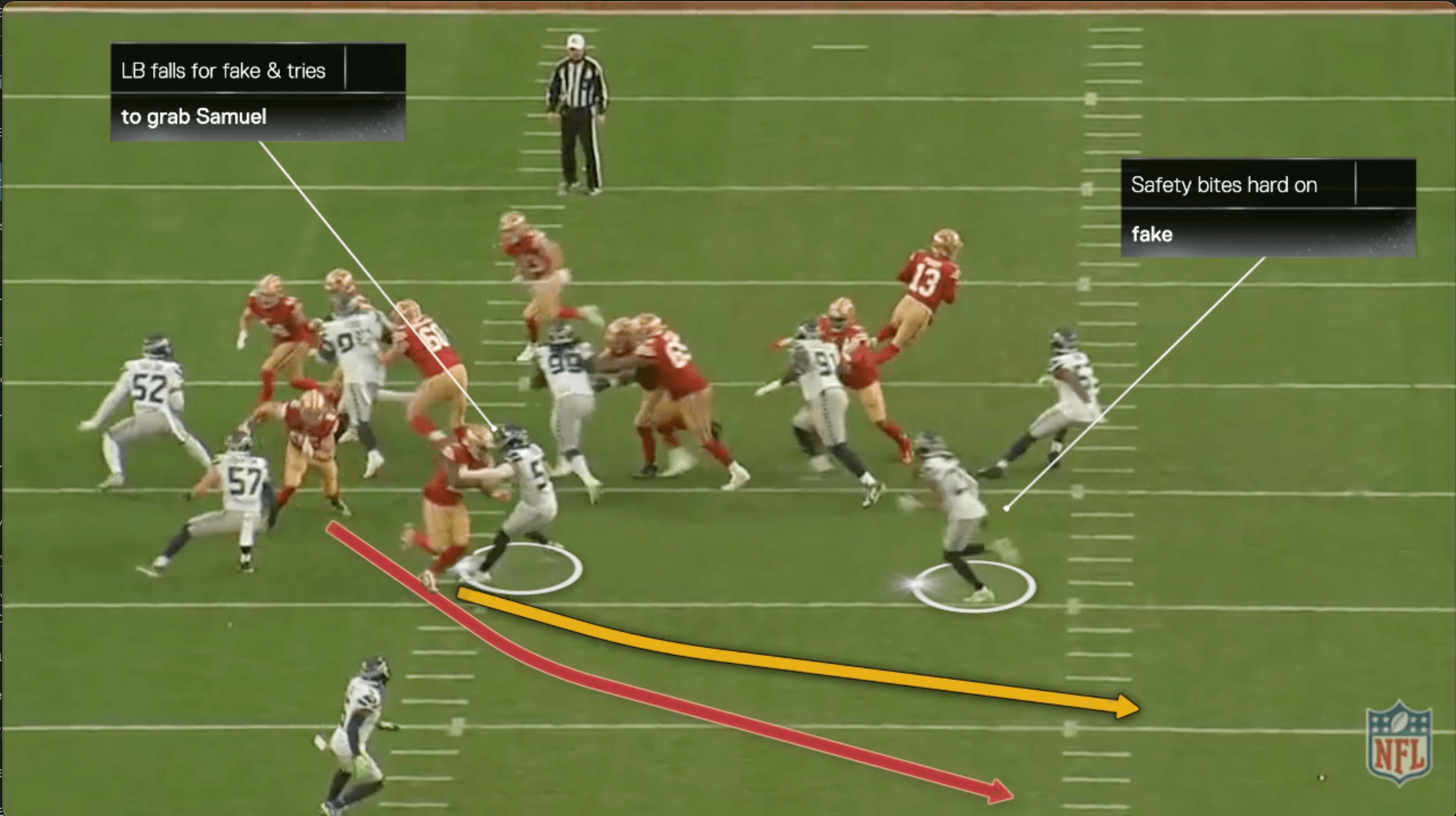 Both the weakside linebacker, Tanner Muse, and strong safety, Ryan Neal, bit hard on the play-action fake. Once Muse realized it was a fake, he desperately tried to grab Samuel before Samuel could cross his face, but his attempt was futile. Samuel caught the ball with no defender within 10 yards of him at the 49ers’ 34-yard line and ran the rest of the way for a 74-yard touchdown.

On a throw-by-throw level, Purdy didn’t play particularly well but settled down in the second half after at first appearing nervous, which is expected for any quarterback starting his first playoff game. It could have been the rain, but Purdy’s ball placement was off, he didn’t see open receivers and he was fidgety in the pocket. His passer rating on third down was 67.1. And the 49ers still scored 41 points. 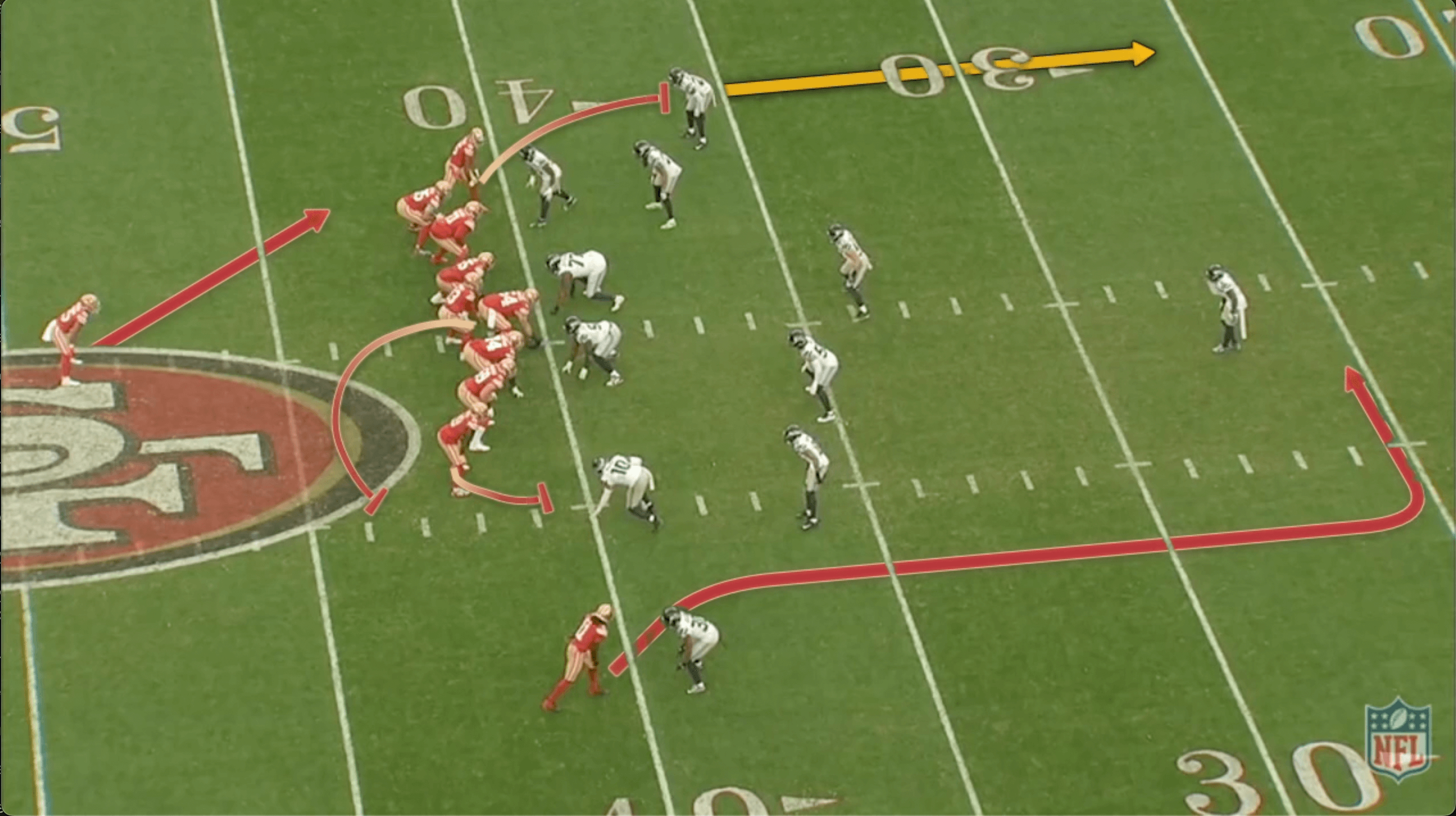 At the start of the fourth quarter, the 49ers were only up six points. Shanahan called one of his signature shot plays: leak. Although the deep route usually comes from a player lined up away from the play fake, this version featured deep route on the same side as the play-action fake. 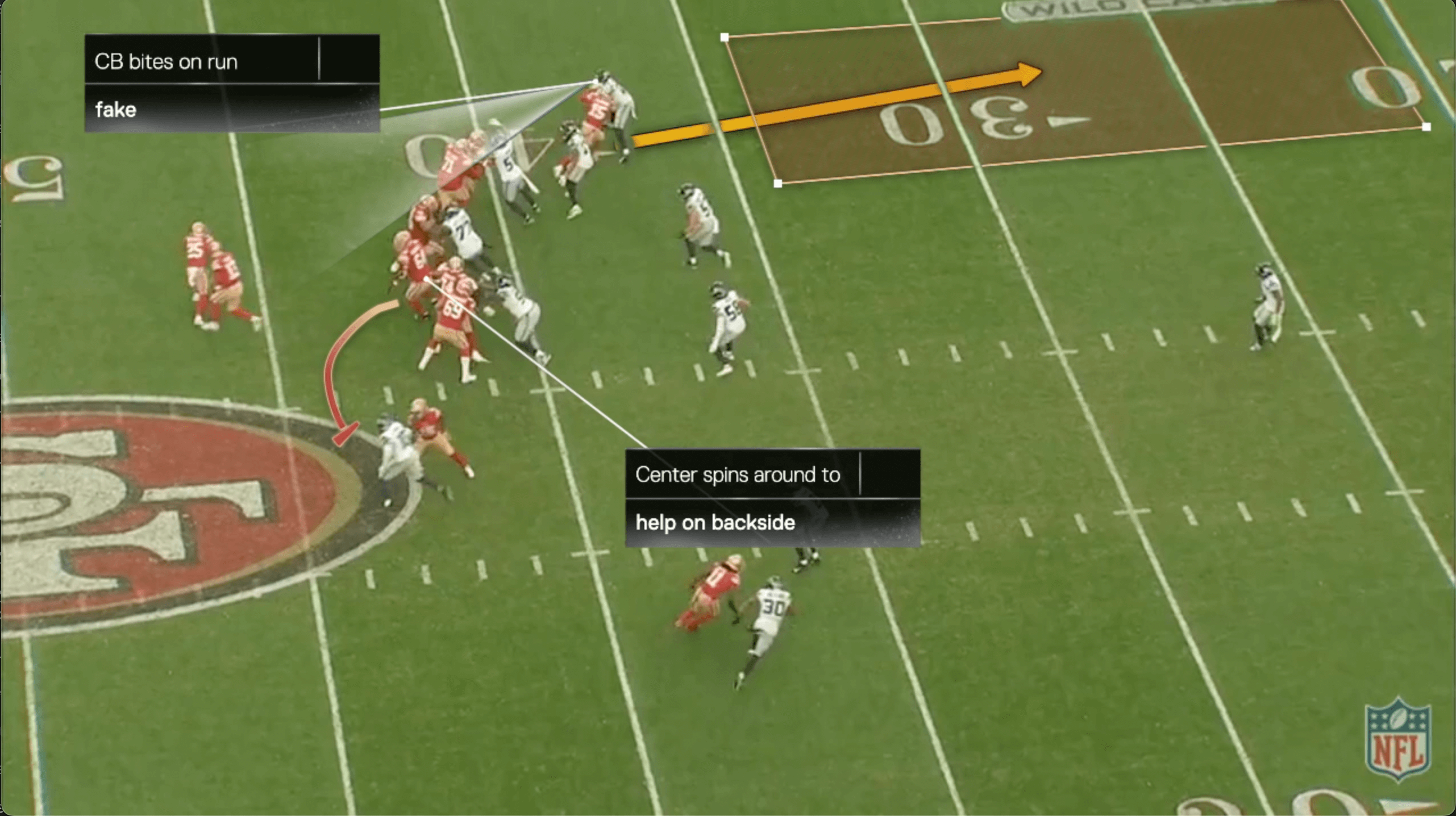 Rookie cornerback Tariq Woolen bit hard on the play fake even though he was responsible for covering deep, leaving Jauan Jennings open down the sideline. 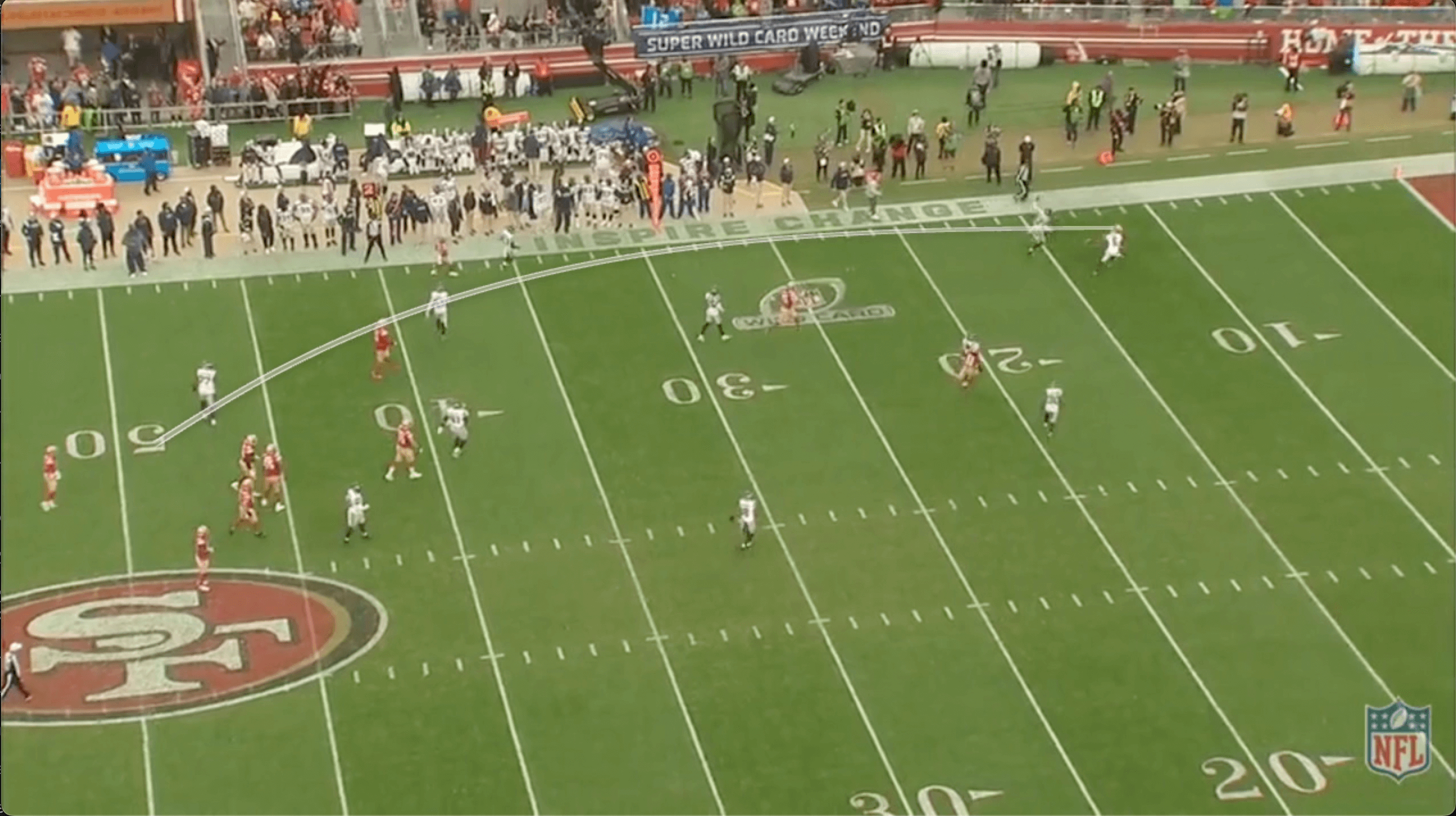 In the end, the pass was completed, but it’s details like this that Purdy will want to iron out before the divisional round of the playoffs.

Purdy’s ability to play out of structure has been a clear advantage over Garoppolo. Including the playoffs, on dropbacks in which he took more than three seconds to throw, Purdy ranks fourth in success rate (47.1 percent). Garoppolo’s success rate on such dropbacks (35.1 percent) ranks 24th.

However, Purdy has to manage the pocket better than he did against the Seahawks. He might have had trouble seeing over the line, but he needs to step up in the pocket more often and resist his instinct to bail outside. 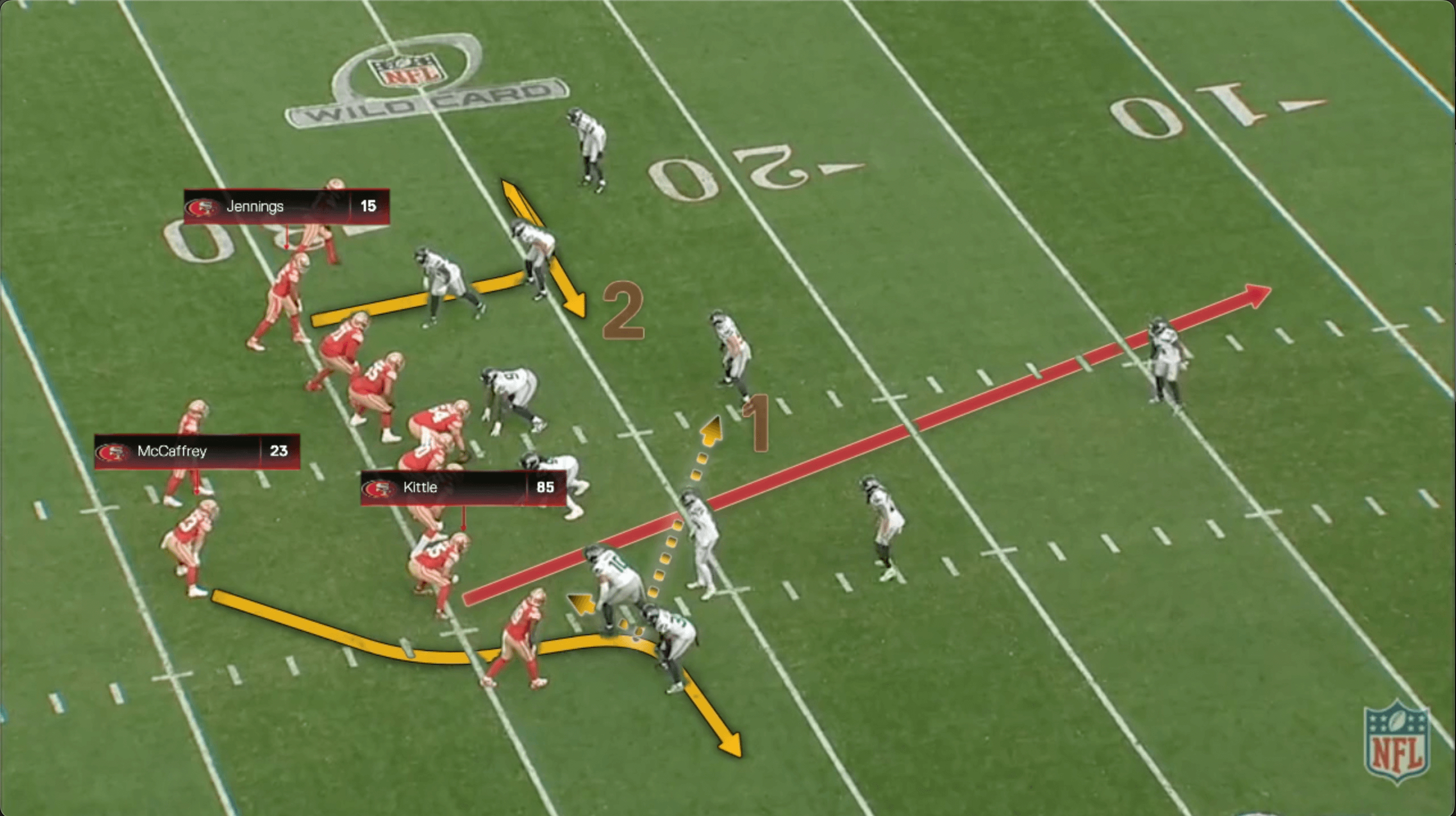 On this play, Kittle ran a divide route right down the middle of the defense, but he was likely an “alert,” meaning Purdy would only look at him if he liked the pre-snap look or peeked at him after the snap. 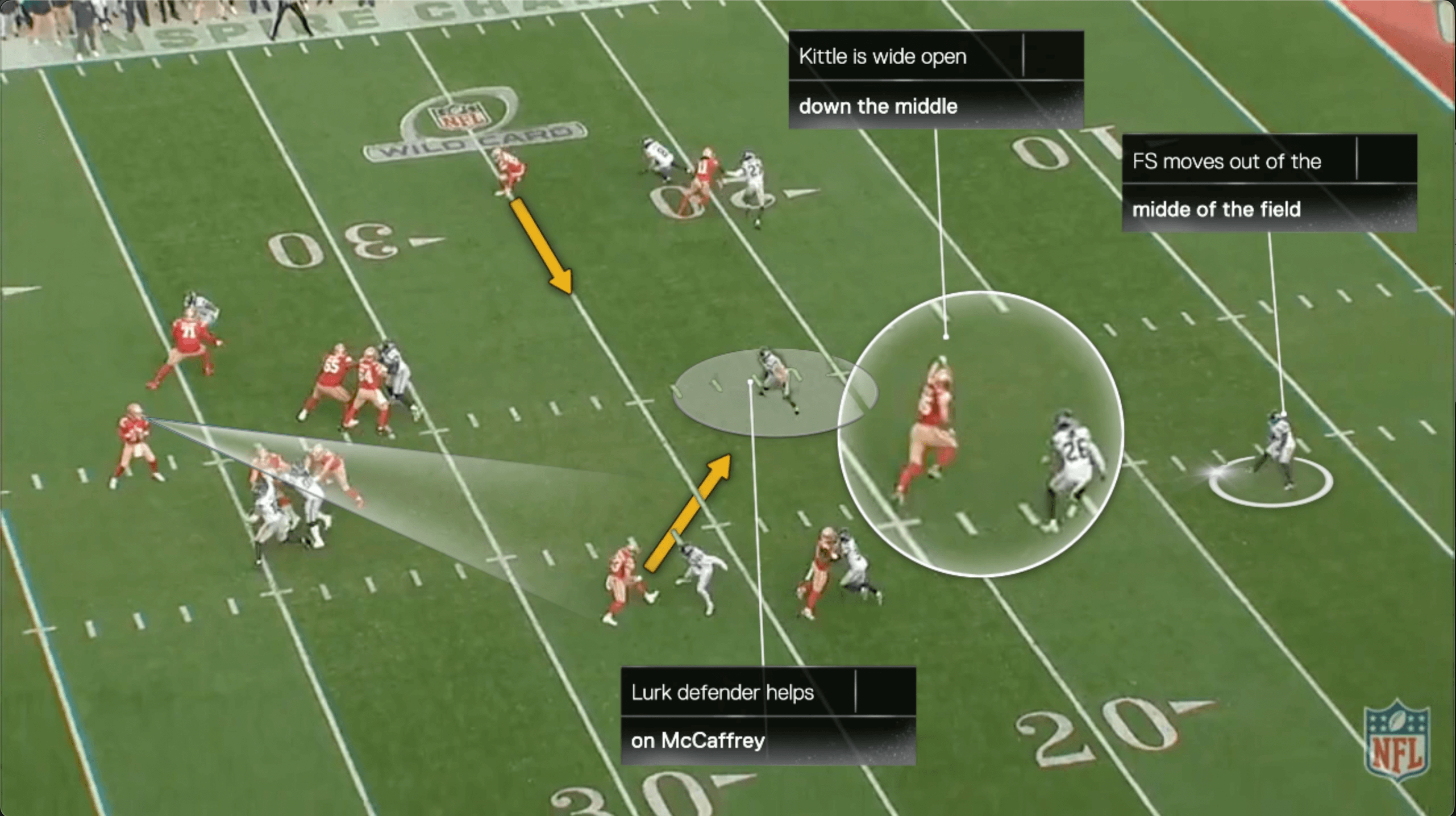 After the snap, free safety Quandre Diggs left the middle and jumped outside. He might have thought Kittle was going to run a corner route and guessed wrong. Kittle was wide open down the middle of the field, but Purdy didn’t see him.

Based on the pre-snap look, it might have been difficult to predict Kittle breaking wide open. Purdy looked to McCaffrey, but the “lurk” defender helped on McCaffrey. 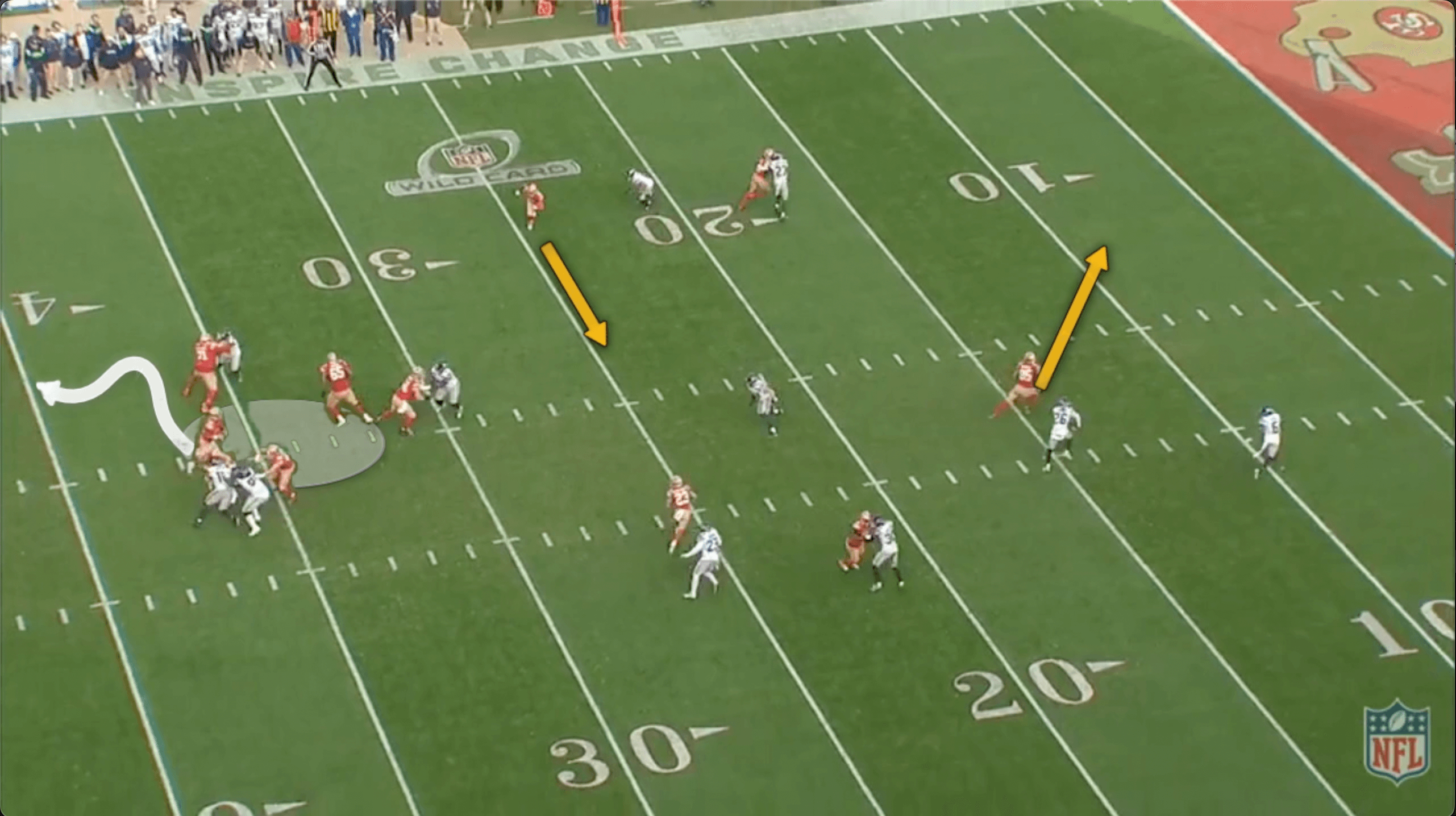 Purdy seemed to look to his next read, Jennings, but didn’t pull the trigger. Purdy had a clean pocket and plenty of room to step up but instead ran backward, bailed to his left and eventually threw the ball away.

Overall, Purdy’s ability to extend led to two touchdown passes, and he should have had another spectacular touchdown throw to Aiyuk that was dropped.

San Francisco offensive tackle Trent Williams had a fair assessment of Purdy after the game.

“I love the fact that Brock is getting the attention he deserves. He is a good player, man. And I think anybody who watches football can see that,” Williams said. “I’m not saying that he’s the next Aaron Rodgers or Pat Mahomes, but he does everything that we need him to do and more. I think we can continue to win with him, obviously.”

Purdy is playing at arguably a higher level than Garoppolo. But it’s noteworthy that his final stat line from Saturday (18-of-30 for 332 yards and three passing touchdowns, along with a rushing touchdown) isn’t reflective of his game overall. This 49ers team — including the coaching staff — is incredibly well constructed, providing Purdy with ideal surroundings.

But this is the playoffs, and better teams lie ahead, starting with the Cowboys on Sunday. The Shanahan training wheels will have to eventually come off, and Purdy will be asked to win in the straight dropback game to lead San Francisco to a Super Bowl. It might not be fair to ask this of a rookie, but will Purdy be able to succeed where his predecessor failed?