The US has announced it will send 90 Stryker combat vehicles to Ukraine ahead of a meeting of allies in Germany on Friday, as Washington looks to help Kyiv seize a narrow window of opportunity to launch a counterattack against Moscow.

As talks on further support for Ukraine continue, US defence secretary Lloyd Austin met his new German counterpart, Boris Pistorius, on Thursday ahead of talks between Nato defence ministers at Ramstein US air base in west Germany the following day.

In addition to sending Strykers for the first time, Washington also announced it will send 59 more Bradley infantry fighting vehicles.

The new US assistance package comes as Washington and its partners recognise that Ukraine may only have a short window of time to launch a successful counter-attack before Russia rearms and reinforces its depleted forces. The US started advanced combat training for Ukrainian forces in Germany this week.

Other governments also made pledges of advanced weaponry for Ukraine. Sweden’s prime minister Ulf Kristersson said it would send an unspecified number of Archer self-propelled artillery systems, which have been near the top of Ukraine’s wish list for months.

Denmark is donating 19 French-built Caesar self-propelled Howitzers, which are also highly rated by Ukrainian forces for their accuracy and mobility.

“To enable the Ukrainians to break through given Russian defences, the emphasis has been shifted to enabling them to combine fire and manoeuvre in a way that will prove to be more effective,” said Colin Kahl, the top policy official at the Pentagon, who travelled to Ukraine last weekend.

The UK has committed to sending Challenger 2 main battle tanks and other countries, including Poland, have expressed interest in following suit.

Germany’s stance is critical. Chancellor Olaf Scholz not only has the power to supply Ukraine with Leopard 2 tanks from his country’s stocks, but he must also decide whether to allow 12 other nations across Europe that use the same German-built modern fighting vehicles to send theirs.

Berlin has made clear it will not commit to sending Leopard 2s unless the US follows suit with its Abrams main battle tanks, which American officials say they are not ready to do.

“I just don’t think we’re there yet,” Kahl said. “The Abrams tank is a very complicated piece of equipment. It’s expensive. It’s hard to train on. It has a jet engine.”

Dietmar Nietan, a member of Scholz’s Social Democrats (SPD), suggested on Thursday that Berlin was nearing an announcement on tanks, telling a Bundestag debate that “substantial decisions” would be taken at Ramstein.

Nietan, a member of the Bundestag’s foreign affairs committee, said Ukraine “has to win this war that was forced on it, for its own freedom and for ours”, adding: “And it will need additional battle tanks to do that.”

He continued: “Co-ordination with our alliance partners is not trivial and it takes time. But it’s necessary.” 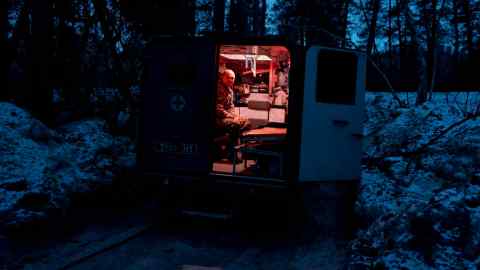 Pistorius, who was appointed on Tuesday after his predecessor Christine Lambrecht resigned, pledged to Austin that Germany would continue to support Ukraine while standing “shoulder to shoulder” with the US — but made no mention of battle tanks.

Instead he cited the infantry fighting vehicles and Patriot air defence systems that the US and Germany made a joint pledge to send to Kyiv earlier this month. Air defence remains critical as Russia continues to attack Ukrainian infrastructure with missiles and drones.

Austin said Germany remained one of the US’s “most important allies” in Europe and thanked the country for its support to Ukraine.